The monastery complex of Camaldoli, including the holy hermitage and monastery, was founded in 1012 by St. Romuald of Ravenna just below the ridge of the Tuscan-Emilian Apennines overlooking the valley of Casentino. The Ravenna saint united the hermitic and coenobitic life in one place. According to the story of the foundation, related by Rudolph I in the Constitutions of 1080, Romuald only gave the hermitage’s first residents the rule of silence, fasting, and staying in their cells, whereas the monastery imposed the Rule of Saint Benedict so as to prepare novitiates to a stricter life of solitude.

The monastery of Camaldoli, erected three kilometers down from the hermitage, in centuries past was called Fontebuono after the spring that supplied water to the monastery and hospital, today a guesthouse. Rudolph II, in the twelfth-century Rule of the Hermitic Life, writes that in Camaldoli hospitality at the monastery had to be observed in every way, as a manifestation of the love the hermits had for every man, fostered by their search for Christ.

1012, traditionally indicated as the year the Holy Hermitage of Camaldoli was founded, first appears in a deposition given by Raniero, prior of the Camaldolese monastery of Saint Michael of Arezzo, at the Perugia trial (1216-1220), which defined the terms of the bishop of Arezzo’s patronage of Camaldoli.

Another tradition is based on the diploma granted by Tedald, uncle of Matilda of Tuscany and Bishop of Arezzo from 1023 to 1036, which gives the hermit Pietro and his brothers the San Salvatore Church in Camaldoli, which he had already consecrated at St. Romuald’s request in 1027. These events were faithfully reported in the Constitutions of Rudolph I, prior general from 1074 to 1087.

The founding date of the Holy Hermitage of Camaldoli can therefore be estimated to be between 1023, the year Tedald took his position in Arezzo, and 1026, the year before the Hermitage church was consecrated.

The etymology of the name Camaldoli, which has been used since the first documents to indicate the land on which Romuald and his five disciples built the Holy Hermitage, remains uncertain.

Tedald’s diploma of 1027 states that the church, consecrated at Romuald’s request to the Holy Savior, is located “in loco qui dicitur Campo Malduli,” or the field of Maldolo. The derivation of the toponym Camaldoli from “Campo Malduli” gave rise to the hagiographic tradition of the land donated to Romuald by Count Maldolo, and the granting of his castle or hunting residence where the monastery of Fontebuono, today known under the name Camaldoli, was built.

Another tradition is recorded in the October 29, 1072 bull of Alexander II, in which he places the oratory of San Salvatore and the Fontebuono hospice with its courts under the care of the apostolic authority. Here, he speaks of a “Campus Amabilis,” a field that is “loveable” to the eye.

These two traditions are combined in the Book of the Hermitic Rule by Rudolph II, Prior General from 1158 to 1165, which discusses both Count Maldolo’s gift to St. Romuald and the field as a pleasant place.

The Development of the Camaldolese Congregation

Sant’Apollinare in Calasse, which the Camaldolesi left the to build the great monastery in Ravenna after the disasters caused by the Battle of Ravenna in April 12, 1512. San Michele in Borgo in Pisa from the twelfth century, Camaldolese. San Michele in Isola in Venice founded in 1212. Santa Maria degli Angeli in Florence founded as an urban hermitage in 1295 at the bequest of Guittone d’Arezzo.

Since Romuald’s single foundation of Camaldoli, five Camaldolese congregations have emerged over the centuries: the coenobitic congregation known as San Michele di Murano, and the hermitic congregations of Tuscany, Monte Corona, Piedmont, and France.

Up through the early twentieth century, the monks who lived in the Holy Hermitage and Monastery of Camaldoli and a other dependences of the Hermitage were known as the Hermits of Tuscany. This distinction became necessary after the Fontebuono chapter of April 24, 1474, when monasteries came together to form the Congregation of San Michele di Murano. Only in 1935 with Pius XI’s bull “Inter religiosos coetus” were the Cenobites rejoined with the Hermits of Tuscany.

A third congregation arose in 1520 when Paolo Giustiniani, Majorate of the Holy Hermitage, wanting to lead a more solitary and austere life, retired to the hermitage of Monte Corona near Perugia. Shortly after Leo X granted Giustiniani permission to found other monasteries and Clement VII formally recognized the St. Romuald Company of Hermits in 1524, it became fully autonomous from Camaldoli on May 7, 1529.

The Piedmont congregation began as the foundation of the Holy Hermitage of Camaldoli by the Blessed Alessandro Ceva, of Piedmontese origin and confessor to Duke Charles Emmanuel I (1562-1630), who in thanks for the end of the plague in 1599, decided to build a hermitage dedicated to the Holy Savior up in the Turin hills in 1602.

The Congregation of the Camaldolese Hermits of Piedmont, like that of France, did not survive the suppressions that took place in the nineteenth century.

In addition to these five congregations, Camaldolese convents have also emerged. The first community was founded by the Blessed Rudolph I in 1086 in San Pietro in Luco di Mugello (in the Province of Florence).

The Camaldoli Forest, now included in the Casentino Forests National Park, owes its existence to the care it was given by monks from the middle ages through the suppression of religious organizations in the nineteenth century.

The Eco-Conscious Use of Natural Resources

The first major transformation of the area was made by the white monks who replaced the native beech forest with firs to take advantage of its lumber and in the apothecary below, today the Antica Farmacia di Camaldoli, produce lacrima d’abeto, a medicinal liqueur first recorded in 1460. Due to this, Camaldoli developed a full-fledged Forest Code for protection of the forest, which was printed in the 1520 constitutions of Paolo Giustiniani. In the constitution On the Hermitic Life, Paolo Giustiniani, Major of the Holy Hermitage, regulates the cutting of plants and establishes the position of a monk dedicated solely to tending the forest. He also prohibits cutting the crown of fir trees surrounding the Holy Hermitage, placed as a natural defense to protect the hermitic retreat.

The Forest in Hermitic Spirituality

Engaged in composing the insert dedicated to Saint Romuald in his Treatise on the Solitary Life, humanist Francesco Petrarca (Petrarch), writing to the Prior of Camaldoli Giovanni Abbarbagliati, describes the forest as an impenetrable shield that protects the solitude of the hermits from the noise of the surrounding world, occupied in ascending the peaks of contemplation, just like the tall fir trees, always stretching towards the sky. In the story of the foundation of the Hermitage of Camaldoli, passed down by Rudolph II, St. Romuald is attributed with a vision of monks ascending to heaven by ladder. On the spot where tradition has it that St. Romuald had this vision in a dream, inspired by Jacob’s ladder, an oratory called Chapel of the Vision was built in the sixteenth century.

In the Camaldolese spiritual tradition, since the twelfth-century Constitutions of Rudolph II, the trees have been taken to symbolize the hermits’ virtues. Today, Rudolph II’s text is printed on the mirrors of the panels at the main entrance to the Holy Hermitage, created by Maestro Claudio Parmiggiani for the Camaldoli millenary. 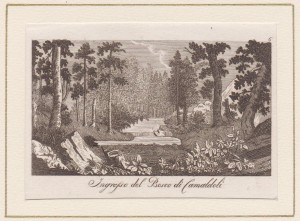