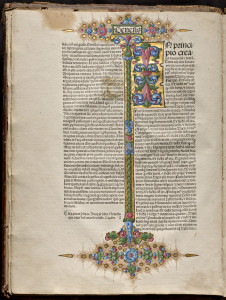 Diaries and journals can be among the most intimate and revealing of texts, offering accounts of their authors’ lives with minimal literary artifice or mediation. Considered as physical objects, too, they accrue the fascination of having travelled with the writer through the events described in their pages. The notebooks kept by the soldier-poet Siegfried Sassoon (1886-1967) during his service in the British Army in the First World War are among the most remarkable documents of their kind, and provide an extraordinary insight into his participation in one of the defining conflicts of European history.

Cambridge University Library holds the world’s richest assemblage of Sassoon’s manuscripts and archival papers. Accumulated from various sources over the course of several decades, the collection was magnificently augmented in 2009 with the acquisition of the papers formerly retained in the possession of Sassoon’s only child, George. A gifted diarist, Sassoon kept a journal for most of his life, and the papers include a run stretching from 1905 to 1959. At the heart of this series are the war diaries, a fascinating resource for the study of the literature of the First World War which enables a fresh analysis of Sassoon’s experience of the catastrophic war which influenced him profoundly.

Born at Weirleigh, near Matfield in Kent, Sassoon read Law at Clare College, Cambridge, but left without taking a degree. Sufficiently wealthy not to need to work, he adopted a life of sporting leisure and bookish versifying until the outbreak of war propelled him into the role of soldier-poet. Sassoon enlisted as a trooper in the Sussex Yeomanry on 4 August 1914, but later took a commission in the Royal Welch Fusiliers. Despatched to France towards the end of 1915, he served with conspicuous physical courage, being awarded the Military Cross in June 1916 for recovering wounded men under fire.

At the outset of war Sassoon was an ambitious and enthusiastic warrior, but by 1917 his first-hand knowledge of the horrors of trench warfare, and his anger at the needless suffering of his men and the ruinous waste of life which characterized battles such as the Somme and Arras, had led to a fundamental change of attitude. This development was reflected in his increasingly well-regarded poetry, the tone of which had grown gradually more bitter as the War progressed. With language incorporating soldierly slang, his poems began to employ sardonic or sarcastic twists, deliberately devised to disturb the complacency of the civilian population at home.

While recuperating in Britain from a wound sustained at Arras, Sassoon drafted his ‘Soldier’s Declaration’, a statement outlining his objections to the continuation of the War. Made as ‘an act of wilful defiance of military authority’, it detailed his refusal to return to duty and his belief that the war was being ‘deliberately prolonged by those who have the power to end it’. His protest achieved national prominence when the statement was read in Parliament and printed in The Times. Instead of being court-martialled, however, Sassoon was despatched to Craiglockhart War Hospital near Edinburgh, as a patient of Dr W. H. R. Rivers. Under the guidance of Rivers, Sassoon resolved to atone for the perceived abandonment of his men by resuming his duties as an officer. He served in Palestine and France during the last year of the War, before a further wound in July 1918 brought his active contribution to a close.

While he continued to write poetry for the rest of his life and wrote a series of critically acclaimed autobiographical memoirs, Sassoon’s reputation remains primarily that of a war poet. The anger, compassion and bitter realism of his poems still resonate today, urging us still, a hundred years on, to ‘swear by the slain of the War that you’ll never forget’.

This digitised collection makes available online for the first time 23 of Sassoon’s journals from the years 1915-1927 and 1931-1932, and two poetry notebooks from 1916-1918 containing rough drafts and fair copies of his war poems. Unlike edited printed transcriptions, the digitisations allow the viewer to form a thorough sense of the nature of the physical documents. Sassoon wrote in a small but neat and legible hand, frequently using the notebooks from both ends. His war journals were used for a wide variety of purposes: in addition to making diary entries Sassoon drafted poetry, made pencil or ink sketches, listed of members of his battalion and their fates, made notes on military briefings and diagrams of trenches, listed locations and dates of times spent at or near the Front, noted quotations, and transcribed letters. The wartime notebooks were small enough to have been carried by Sassoon in the pocket of his Army tunic, and many had enclosures such as letters tucked into the outer cover or inner pouches; some bear tangible evidence of use in the trenches, from the mud on notebook MS Add.9852/1/7 to the candlewax spilled on MS Add.9852/1/9, presumably as Sassoon sat writing in his dug-out by candlelight.